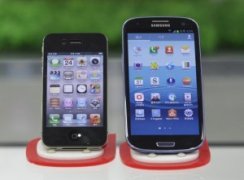 Recently, there has been a lot of talk regarding smartphones and tablets, with the surge in their popularity convincing many analysts that the handheld device is the future.

A number of publishers have been turning their attention to the aforementioned platform instead of remaining focused on consoles and PC. It is for this very reason that the entry of Activision into the mobile gaming market hardly came as a surprise.

During an interview with CVG, the vice president of mobile Greg Canessa revealed that the studio is considering all of its franchises for mobile, not ruling out any of the 350 brands and licenses that has become a part of its portfolio in 30 years.

“We have a rich thirty-year history from the Atari days to the Blizzard merger. We have about 350 different brands and IPs to work with,” he said. “That’s legacy IP, that’s triple-A IP, and that’s licences with other companies.”

Activision has a huge list of blockbusters in its collection, including Call of Duty to StarCraft. There are plenty of games that the publisher can safely consider for smartphones, though it will have to deal with the high expectations of gamers who have already played and loved the console or PC version of the franchise.

Canessa refrained from leaking anything about any project that Activision may be working on for mobile devices. However, he did explain how they plan on deciding which franchise to bring on to the mobile platform.

“Our strategy comes back to the gamer,” he said. “We are asking ourselves: What will be the most fun, attractive, and interesting Activision property for the mobile gamer? Some IP probably maps better to mobile devices, but mobile allows for all kinds of genres. It’s a broad fertile field for game creators, unlike social games. So we’re not ruling out any IP.”

Activision established its mobile division The Blast Furnace in May and released its first game, a reimage of Atari’s Pitfall, for the iOS earlier this month.

Mobile devices are indeed a fertile field, something that has been indicated by the growing interest of publishers and developers in the platform. With the short life-cycle and rapid technological advancement, there is plenty of opportunity for developers to innovate to their liking. They also have a larger and more diversified market to cater to, thus getting more freedom to deviate from the established gaming norms to experiment a little.

The publishers, on the other hand, are beginning to realise that smartphones and tablets offer them an opportunity to make big money without having to incur as much cost as they have to for console and PC games. The emergence of casual gamers has also heavily contributed to the temptation for the publishers to start investing in games for the mobile devices.