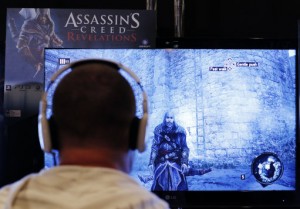 No Animus within an Animus type ending as Ubisoft explains that the conclusion to Assassin’s Creed 3 will make sense and tie-up all the loose ends.

If anyone has played any of the Assassin’s Creed games then they will understand just how confounding the endings to each game can be.

SPOILERS: The first game ended with Desmond Miles, the present day protagonist, gaining Eagle Vision as a result of the bleeding effect and finding a number of mysterious markings, coordinates, shapes and clues in his cell without any explanation as to what they were.

The second game took the confusion a step further as it brought in the creators, or rather, aliens or, well, its best not to get into the debate and how they warned Ezio about the end of the world. The trend continued till Revelations, which finally made some sense, but still left a million questions unanswered.

However, by the end of Revelations Altair and Ezio have a truly classic moment when they finally meet, and Ezio even has a few words to share with Desmond as well, at the same time there is a whole end of the world sequence explained as a result of a solar flare.

Despite all of that Desmond comes out of the Animus coma claiming he knows what to do and there is still no news on what has happened to his girlfriend who he was made to stab at the ending of Brotherhood. SPOILER END.

If that did not make much sense then don’t worry, it hasn’t made sense to many either.

However, the lead writer of the Assassin’s Creed series, Corey May, explains that fans can rest assured that the game will not end in dream within a dream type scene.

“The ending should not come out of nowhere.” How very kind, “You will not wake up and find that you were in an Animus reliving the life of someone who was in Animus. We are not doing that. It was not all just a dream.”

That ending would have opened up a whole new world in terms of sequel possibilities but would have giving less meaning and importance to the current series and their story arc.

There was another hint towards Desmond’s demise as he continued, “I think people that have invested in the Desmond storyline will understand where the end of the game comes from. We’re tying up loose ends and providing answers and resolution to things.”

Before concluding, “You’re not going to get another tremendous insane-o cliffhanger.”

So what does the reader make of this bit of news; does it have them even more excited to play the game and end the story or are they not buying the ‘no cliffhanger’ story? Let us know in the comments section below.