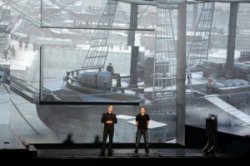 The game’s developer refuses to specify the release date for the PC version of Assassin’s Creed 3, although reports indicate that the game will be leap of faith-ing onto Windows sometime in November.

One of the biggest franchises in the current generation of video game consoles, Assassin’s Creed never fails to disappoint to show up with a new instalment every year. While many slate the annual release policy that Activision’s Call of Duty series has, they do not feel exactly the same way about the Assassin’s Creed series, Revelations did stretch fans of the series although the ending of the game more than made up for it.

In keeping with Assassin’s Creed tradition, Ubisoft showed off a trailer during the Press Conference which gave last year’s Assassin’s Creed: Revelations trailer a run for its money and that in itself is quite an achievement.

The Revelations trailer showed Ezio sailing across stormy seas, climbing the highest mountains and taking on an army of Templars single-handedly with Woodkid’s Iron playing in the background. That is before he was captured and about to be executed, by being hung off the same ledge where Altair took his first leap of faith in the original Assassin’s Creed, before turning on his captors.

That trailer raised the bar and it would take something special to surpass the ecstasy of that particular nerdgasm but the Assassin’s Creed 3 trailer came pretty close.

However, all the PC gamers who had to change their pants after watching Connor take on the entire British Army single-handedly – and winning – will have to wait at least a month longer before they can don their white hoods again and use their hidden blades (no pun intended).

The reason for the wait is because Ubisoft has not specified the release date for the PC version of Assassin’s Creed 3, which if one looks at the studio’s track record means that gamers can expect it to hit shelves at least a month after the console version is released.

It would come as no surprise if the PC version is released a month after the console version hits stores, as is another tradition that Ubisoft has upheld all these years and looks set to continue.

Assassin’s Creed 3 sees the series move in a new direction with a new setting and a new protagonist. The game has been in development since 2010 and is built on an all-new engine capable of rendering battles similar to the one seen in the E3 trailer.

PC gamers need not be too worried as many expect the PC version to be out before Christmas.