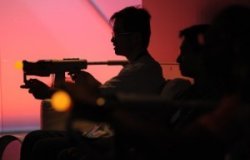 Well, not really, but the reveal trailer for Sony’s upcoming Move controlled horror game, Until Dawn, does seem to have a character awfully similar to the Batman villain.

Gamescom is one of the major events in the video game industry calendar and while publishers usually keep their big announcements for E3, the event held every year in Germany does get its fair share of importance as well.

Sony usually uses the event as an opportunity to announce price cuts and newer, (read, ‘slimmer’) models of its current hardware. This time around the publisher took things to another level as it announced a whole host of new titles for their second generation portable gaming console, the PlayStation Vita.

Many analysts and gamers have complained over the lack of content on the console since its release. Titles such as Uncharted: Golden Abyss, FIFA Soccer and WipEout 2048 kept gamers interested at the start but since then there have not been enough triple-A titles to satisfy gamers. That is with the exception of Mortal Kombat and Resistance: Burning Skies.

It has been a few months since those games were released and LittleBigPlanet is set for release this September and Assassin’s Creed 3: Liberation and Black Ops: Declassified will hit shelves this holiday season.

However, Sony seems to be aiming towards making 2013 the year of the PlayStation Vita as it announced a whole host of first-party titles for its console. Guerrilla Games will be releasing Killzone: Mercenary on the console and Media Molecule are set to charm the world with Tearaway, their latest IP.

At the same time, the PlayStation 3 is getting its share of new titles as well with The Last of Us looking like an early contender for game of the year already. The PlayStation Move is also getting a number of games which look to make use of Sony’s motion controlled peripheral.

One such title is the horror game, Until Dawn, which gives off the aura of every teen horror movie one has seen since the inception of the genre.

The game’s developer had a few words to say on their upcoming title and explained that they have “been working on this game for a while now, working with Hollywood writers and US TV talent, doing our best to bring the teen horror experience to PlayStation.”

The plot itself revolves around “the anniversary of their friends’ disappearance” and how “a group of classmates visit the site of the mystery to bury their ghosts and get some closure.”

The developers also explained that they aim for players to “use the PS Move controller in a totally natural way.”

As for the Scarecrow reference, well readers need to check out the trailer to understand exactly where that came from.