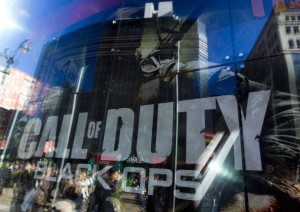 Activision, Ubisoft and Square Enix all had a title in top three of the United Kingdom’s Software sale’s charts as FIFA 13 finally gave up third place.

The Christmas period is crucial for many retailers and publishers when it comes to sales as the festive cheer and spontaneous last minute shopping is the final chance for many to add some weight to their end of year financial reports.

There was little doubt that Black Ops II would end the year at number one. The game reached the $1-billion units sold mark faster than its predecessor, Infinity Ward’s Modern Warfare 3, and gamers have praised Treyarch, the game’s developers for their willingness to take risks and change things up.

Second place saw quite a battle as two of this year’s biggest titles duked it out to see who would end the Christmas period as runner up. As it turned out, more gamers seemed to want to visit an insane paradise island gone to hell setting than anything else, apart from zombies obviously. Far Cry 3 ended the year on a strong note and Ubisoft’s willingness to back the title and push it to triple-A status has been more than well received by gamers.

In third place, making a triumphant return to the gaming fold is none other than everyone’s favourite bald-black-suit-white-shirt-red-tie-wearing assassin, Agent 47. His latest game, Hitman: Absolution, has been praised by many a gamer and critic and it seems that Square Enix have breathed new life into one of gaming’s most memorable icons.

FIFA 13, which had been in third place longer than Germany were in France, is finally knocked out of the top three as nearly everyone seems to have bought a copy of the game for themselves. Which really makes one wonder, who is still buying the game?

There is no Christmas best-seller list without the obligatory rhythm or dance title and this year is no exception with Ubisoft’s Just Dance 4. The game was released a few weeks and has maintained a place for itself in the charts for quite some time and one can expect it to see so well into in the new year as well.

Other notable titles include, Need for Speed: Most Wanted, which was on sale for every platform, including the PlayStation Vita. The game ended the Christmas period in sixth place, while Assassin’s Creed 3 managed a seventh place finish.

Rounding up the top ten were 343’s Halo 4, Warner’s Lego: The Lord of the Rings and finally, THQ’s WWE 13.  That’s it for this week’s look at the charts, join us again next week.

So which games did you buy this Christmas? Let us know in the comments section below.