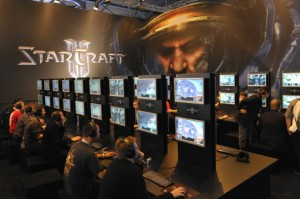 The free-to-play model is really catching on in recent times, with more and more publishers realising the fertility of the field.

It turns out that Blizzard is also starting to become interested in the free-to-play model. This, however, has got nothing to do with their immensely popular World of Warcraft franchise.

Instead, the company is considering the model for StarCraft II, looking into the possibility of making the multiplayer experience into a free-to-play one.

The lead designer of StarCraft II: Heart of the Swarm Dustin Browder stated during a panel at the Valencia eSports Congress that even through Blizzard is seriously considering a free-to-play StarCraft II multiplayer experience, they are well aware of the challenges that await them.

Browder conceded that one of the biggest concerns for Blizzard was to figure out a way to keep the gameplay balanced. The company would need to come up with a structure for updates that will not only allow them to monetise the multiplayer experience, but will also ensure that the overall experience does not end up becoming dull and unappealing because of one player enjoying an unfair advantage over the other.

“We don’t know how [Blizzard] would monetize it. While it might be good fun for me to play against someone with only half the units available to them, that’s not going to be an enjoyable experience for them,” said Browder.

While Blizzard is simply exploring the possibility of incorporating the model into the multiplayer of its established franchise, the general reaction of the fans to the idea has not been very positive.

The major concern for the fans is that once Blizzard brings the free-to-play model to the StarCraft franchise, it would put the game at a huge risk of losing its quality and direction.

They were also uncertain about how the company can possibly handle the balancing issues since an access to powerful units is bound to put the player who is willing to spend more real-life cash than his opponent at a huge advantage.

Free-to-play is considered by many analysts as the business model of the future, with majority of the games to allow gamers to get a taste of the basic elements of the game without any cost, but offering additional content by charging a small fee for it.

However, while the model is excellent at attracting players, even casual gamers, to a certain game, it is eventually comes down to the content of the game to keep retain them.

The likes of League of Legends and Defense of the Ancients (DotA) have done exceptionally in the free-to-play space. In order to compete with such established titles, Blizzard and other companies who are considering embracing the model for the multiplayer portion of their game will surely have to put something really special on offer.