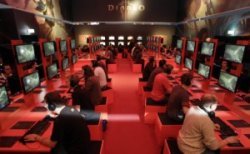 Blizzard Entertainment has been experimenting a lot with its pot of gold, Diablo III, over the last few months, one of which was a Team Deathmatch mode.

The fans of the popular action role-playing game (RPG) title would surely have been anxious to feast their eyes on the mode that would have allowed them to experience something similar to what Riot has been delivering successfully with League of Legends or Valve is offering with Dota 2.

However, they have been asked to stop waiting by the company as the project will not be arriving anytime soon.

The game director of Diablo III Jay Wilson explained in a blog post that the Team Deathmatch mode was not quite where the company wanted it to be and was well short of their expectations for the sort of Blizzard experience that they were aiming to offer to the fans.

According to Wilson, the mode suffered from a couple of issues that prevented it from becoming as entertaining as the company would have liked.

The first of these issues was the lack of depth, which was causing the game to become old very quickly and making the players lose their interest.

The feedback received from the people that were asked to test out the mode was not very encouraging for the developers. While some testers found the experience entertaining, a significant majority did not find it very immersive and therefore did not feel like playing beyond a few hours.

“Simply fighting each other with no other objectives or choices to make gets old relatively quickly,” Wilson conceded. “We’ve brought a lot of people in to try out Team Deathmatch and, while some found it entertaining, most of our testers didn’t feel like it was something they’d want to do beyond a few hours. Without more varied objectives, or very lucrative rewards, few saw our current iteration as something they’d want spend a lot of time in.”

The second issue in the Team Deathmatch mode was that of class balance. Since Blizzard had developed Diablo III keeping the player versus environment (PvE) setting in mind, balancing the classes in the PvP setting was becoming a huge issue. A lot of compromises needed to be made, ranging from runes and items to skills. The company, however, is looking to keep the game as close as possible to its original form and therefore not too keen on making significant alterations.

While these two key issues have caused Blizzard to drop the idea of a Diablo III Team Death for now, the fans still have the duelling option coming their way with the next patch. The new addition will surely contribute to keeping the experience offered by one of the best games of the years fresh and exciting.