Carver will fit into the Dead Space universe – dev 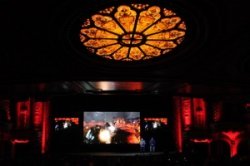 The first two Dead Space games have been single-player experiences and brilliant ones at that – barring the competitive multiplayer mode that was introduced in Dead Space 2. However, the third game in the series is looking to add another dimension to the experience by allowing players to team up with a friend and play through the game together.

Visceral’s inclusion of the co-op mode has raised concerns from fans that the essence and foundation on which the series has been built on is now in jeopardy. The entire experience was based on feeling isolated in the vastness of space on board a claustrophobia-inducing ship, taking on an endless army of necromorphs and facing one’s inner demons.

However, the developer has assured fans that those players who still want that experience will still have it and that the co-op mode is optional with players able to play through the game on their own with no difference in the storyline.

Yet, at the same time, Steve Papoutsis, the executive producer, also added that those who want to share that experience with a friend would not be sold short as they worked hard in creating a character that would not feel out of place in a Dead Space game.

Papoutsis explained, “We needed to create a character that fit into the universe and didn’t feel like a throw-away character.” Before elaborating, “We first announced John Carver through a graphic novel, so he has his own unique personality and backstory. So when you get into the game he actually brings value to what’s going on. You learn about him and his own personal demons.”

According to the developer, the inclusion of a second character that is going through something similar to what Isaac Clarke is experience is something “That’s very different, and we feel it’s very innovative.”

Dead Space 3’s existence was originally leaked by an Israeli television channel which broadcast images on the development studio working on the game during a visit. However, that merely confirmed what everybody already knew as the second game ended with the possibility of another instalment.

However, since then information about the game has flooded in including the game’s setting, an icy planet known as Tau Volantis, the main characters as well as the introduction of a co-op character and mode.

The latter concerned fans as did the fact that the gameplay now resembled a cover shooter, which made fans question which direction the game was heading in. while opinion may be split at the moment one can only come to a conclusion about the game when it is released early next year.