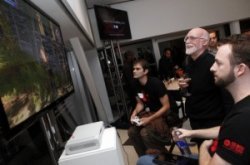 Tim Clark from CVG got some hands on time with Crysis 3 and even at this early stage, the video game journalist feels that the game is what Crysis 2 could have been had the developers, CryTek, been given more time.

When it comes to talking about graphics in a game, Crysis is sure to enter the conversation at one point or the other. Yes, Killzone 3 has been praised for its atmospheric visuals and Dead Space 2 for its haunting environments as well as Batman: Arkham City for its expansive feel but when it comes to pure real world visuals, Crysis 2 raised the benchmark on its release.

However, the game is more than just a pretty face, as the first-person shooter also has some serious gameplay up its sleeve. Gamers can use the nano-suit, which pretty much makes them a super-soldier with abilities that no one on the battlefield has, including the ability go invisible, to their advantage.

Despite those minor flaws one can be sure that gamers will be keeping a close eye on everything related to Crysis 3 and based on early previews of the game it seems that Crysis 3 is well on its way to raising the bar once again.

According to Tim Clark of CVG, who had hands on time with the early build of the game, the game feels more complete and less rushed than its predecessor, “How it felt to me was really like the Crysis game that they probably set out to make last time around [but] ran out of time to do.”

The praise did not end there as he continued, “It felt incredibly polished, the weapon set was really playful and punchy, by that I mean the dudes weren’t like bullet sponges.”

Lastly, he got into the more technical aspects of the upcoming game, “Structurally, it seemed to flow much more nicely than Crysis 1 did, which felt quite uneven to me at times. It just seemed really slick and blockbustery, which is what gave me the impression of it having the sense of being the finished article, whereas Crysis 2 was a bit more of a rush to get out the gates.”

It seems that gamers have a first-person shooter to look forward to, however they will have to wait until February 2013 as that is the release period stated by EA for the game’s release. At the same time there has been no word as to whether or not the game is set to be released on the Nintendo Wii U either.