Home » News » News , Uncategorized » Diablo 3 real-money auction house goes live but only in the US 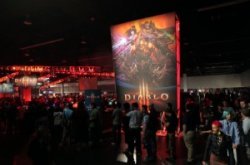 Blizzard has finally released the long awaited real-money auction house after delaying the feature a number of times. However, the service is only available in the United States for the time being.

The Diablo series took a long break from the world of video games after the second game in the series, Diablo 2, was released a decade ago in 2002. Gamers have had to wait and rely on rumours, speculation and unconfirmed reports of a third game in the series before Blizzard finally broke the silence and light up over a million hearts when they announced that 2012 would be the year Diablo 3 would be gifted on to the world.

When the game finally was released it managed to sell over 6-million copies in its first week, going on to become the fastest-selling PC game of all time. Breaking the record set by World of Warcraft.

It was not all smooth sailing though as a number of game breaking bugs emerged diverting the developer’s focus on patching them instead of expanding on the promised list of new features to be added.

One of those features was the ability to use real money to purchase in-game content in Diablo 3’s auction house. The release of the feature was delayed firstly, due to security concerns as Blizzard wanted to ensure that the transactions were secure and secondly, due to the fact that the errors were a major issue.

It seems that Blizzard has finally sorted out all the bugs and glitches and is now rolling out all the features. The real-money was released in the US earlier in the month with plans to release the feature in other regions in the coming months as well.

A post in Blizzard’s official blog read, “We are rolling out elements of the real-money auction house separately to ensure all of our players have the smoothest possible experience.”

The statement continued and confirmed that the feature would be available in other regions soon. “We’ll have more information on the availability of the European real-money auction house and the remaining Americas currencies soon.”

However, gamers interested in taking part in the auction will first need to authenticate their account on Battle.net.

It will be interesting to see how successful the auction house will be and what kinds of transactions will take place in the game, as Diablo is a series known for its hardcore fans.