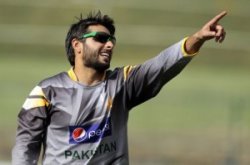 Here is your one-stop shop for an in-depth look at how you can set up your team to take full advantage of the 24 changes allowed during the group stages of the tournament.

Cricinfo is set to have the cricket fanatics all pondering over which formation they want to set their team up in, which players to have in their team and also who one appoint as their captain. The likes of Pakistan’s Shahid Afridi, India’s Virat Kohli and Australia’s Mike Hussey are just a few names that will be in everyone’s teams, but they shouldn’t be and this is why.

Players used to the scoring system and transfers in the football fantasy leagues need to completely forget what they have learnt so far, as the cricket fantasy league needs a higher level of tactical astuteness and long-term planning.

First and foremost, a manager (that would be you) needs to understand that they are allowed a total of 24 changes over a course of 7 days. That means that managers can make 3 changes to their team at the end of every match day and still have 3 changes left over in case of any emergencies that may arise.

Those 24 changes can be used anytime between the end of the opening match of the T20 World Cup between Sri Lanka and Zimbabwe, to the match between Bangladesh and Pakistan. After which, there will be unlimited transfers until the start of the Super Eights stage.

Remember the rule of 3. Plan ahead for the next three matches, and make use of the recommended 3 daily changes.

For example, the first team selected should NOT have any Pakistani, West Indies or South African players. In fact, the only players in the team should be from Sri Lanka, Zimbabwe, Australia, India, Afghanistan and Ireland.

Readers will notice that these are the teams that will play on the 18th and 19th of September, whereas the West Indies and Pakistan teams aren’t in action until much later on. In essence, the spot is being wasted on a player or players that aren’t even playing.

By the time the South Africa versus Zimbabwe match comes around, managers will have been able to make six changes, even more if they feel like – though we don’t recommend it, bringing in South African and Zimbabwean players if they wish. By the 21st they can potentially have transferred in three Indian players for their match.

The basic idea is to have a team with players that are playing in ‘today’s’ match and transferring in players from teams that will be playing the next day, at the end of today’s match. 3 transfers a day for a dynamic, constantly changing side that constantly earns points.