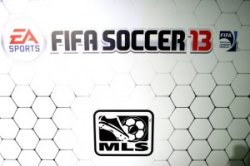 PC version gets the fix first with console versions set to receive an update to address the Ultimate Team and Career Mode issues.

FIFA 13 is 2012’s biggest launch by a country mile. The game sold over 4-million units within 72 hours of releasing and that too in the United Kingdom alone. Not only did it break the series record, which was previously held by its predecessor, FIFA 12, but it also attracted huge media attention as well.

However, there have been a number of issues with the game that have ruined the experience for some of the players especially on the Career Mode and Football Ultimate Team front. The latter is perhaps the FIFA series’ most popular mode as the card-based game has a huge following as well as applications on a number of platforms tied in with it.

The issues become so rampant that EA Sports, the developer of the game, began working on a patch to address the issues. The patch has already been released on PCs and is set to hit both the PlayStation 3 and Xbox 360 versions in the next couple of days.

The main issues that the update will address are the Connection Stability problems that players are experiencing when playing online seasons as well as the freezing that occurs when players start a Career Mode with a free agent and while using their game face.

At the same time issues with players retiring or being brought back from loan will also be resolved and for those cheaters out there, the option to lower the difficulty when they’re losing a FUT Seasons match will also be removed.

On the team front, Naopli’s full kit and crest will be available in both the main game as well as the Ultimate Team feature.

Another Career mode related changed deals with the National Squads now being properly reflected in home screen of Manager Mode.

In terms of Be a Pro, the “Legacy defending and passing assistance options (has been) removed in Pro Clubs” and the “Freeze in Pro Clubs results” has also been addressed.

Lastly, the matchmaking option for Be a Pro has been fixed to better match the player with his desired option of going between ‘Any’ and ‘Match Keeper’.

There are a number of other issues as well with a number of complaints being registered at how some players do not get their prizes after winning their respective FUT tournaments. EA is yet to comment on the matter but one can expect an update on that soon enough.

Apart from these, are you experiencing any problems with FIFA 13? If you are, let us know in the comments section below and no, losing every match does not count.