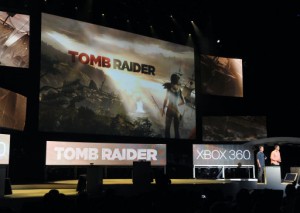 The gaming industry has been showing a significant transformation in recent times, with the focus of developers shifting from hardcore gamers to more casual players. The industry finds themselves staring at a whole new market to cater to, which in turn have led to the emergence of new business models, with free-to-play games with premium downloadable content being the most popular of them all.

Despite the sudden change in priorities of gaming industry giants, Livingstone has no doubt that single-player games will never go out of fashion.

The President of Eidos acknowledged the fact that the games industry was indeed diversifying and daring to deviate from the norms. However, he refused to agree with the notion that the contemporary concept of video games cannot co-exist with the traditional one. He asserted that the idea of games as product and service can survive alongside each other without posing any real threat to each other’s existence.

Sharing his views with MCV Pacific during an interview, Livingstone accepted the fact that social and casual gaming was indeed gaining popularity. However, he pointed out that the single-player experience was not threatened by this new and rapidly growing trend in the market.

Using one of his own work, Tomb Raider, as an example to make his point clearer, he explained, “A game like Tomb Raider has historically been a graphically intensive single player experience, and that’s not simply going to disappear overnight. What we’re seeing is an emergence and a growth in the digital area and a new consumer which has come along [the casual gamer, which has almost reached ascendancy], but niche gamers are still going to be here and want content delivered specifically for them.”

The depth found in the characters, graphics and game design of single-player games can hardly be compared to that of massively multiplayer online (MMO) and various free-to-play games for casual players. While the distinct experience offered by the two categories may be comparable, it is not possible to prove that either of them enjoys dominance over the other.

The reception enjoyed by titles such as Tomb Raider, Mass Effect, Deus-Ex and Darksiders are enough proof that the single-player games are not in any sort of danger. If what Livingstone claims is believed to be accurate, then the hardcore gamers have nothing to worry about. There is no denying the fact that the market has indeed changed and new breed of gamers are gradually becoming more prevalent, but it is still not a good enough reason to believe that the games industry will completely shift to the new model. Single-player titles will keep coming in the foreseeable future regardless of what some industry analysts believe.