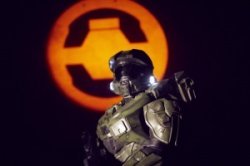 Microsoft has announced that the recent sales of Halo 4 have seen the series lifetime sales cross the 50 million units sold mark since the face game was released over a decade ago.

One of the most iconic series in the recent decade, there really are only a handful of games that can boast the same level of, well, anything, as the Halo series. In terms of fan base, in terms of sales and in terms of critical acclaim, the Halo games are in a league of their own.

Setting industry records before the Call of Duty series broke through with Modern Warfare, Halo was the first-person shooter to play.

The first game in the series, Halo: Combat Evolved was released in 2001 on PCs and gave Half-Life a run for its money. However, Microsoft pushed the series and the sequel, Halo 2, did the business as well, both in terms of reviews and sales.

Halo 3 was released which saw Master Chief, the game’s iconic protagonist, enter cryogenic sleep as his war against the Covenant and Flood was complete. Since then Halo 3: ODST, an expansion of the game and Halo: Reach, a prequel to the series were released by Bungie.

However, once those games were done, the creator of the series, Bungie, decided to move on and left the rights of the IP with Microsoft. The publisher wasted no time in hiring 343 Industries to create another trilogy in the Halo universe and they brought back Master Chief.

The game saw a steady stream of hype build up as it approached its release date and upon release the game recorded massive sales and a number of record breaking stats as well. Halo 4 was a success and only recently has the success of the series been truly reflected as it passed the 50-million copies sold mark.

A statement from Microsoft read: “To date, more than 50 million copies of Halo games have been sold worldwide, driving more than 5 billion hours of gameplay by people connected to Xbox Live.”

So far, Halo 4 has contributed to over 4-milllion units of those sales figures in its first month alone. One can expect that number to grow as time wears on and DLC for the game is also being announced as well.

343 Industries has confirmed that prep work for the next game in the series, Halo 5, is already underway and the developers are looking at new technology and new ideas to bring to the universe. It will be interesting to see if Microsoft pushes the series towards an annual release cycle or takes a break and releases the game in 2014.

But what does the reader think? Let us know in the comments section below.