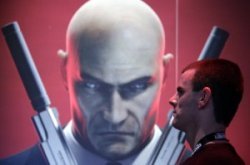 Hitman Absolution’s game director, Tore Blystad, defends studio and controversial trailer stating they did not know it would turn into such a big issue seeing how Agent 47 has been killing indiscriminately for ages.

The Hitman series is set to make its long awaited arrival on the current generation of consoles later on in the year as Agent 47 is set to take out a number of targets in his quest for vengeance and answers on the Xbox 360, PlayStation 3 and PCs.

However, it will do so with plenty of controversy surrounding the game after the latest trailer for Hitman Absolution, Attack of the Saints, was condemned by sections of the media and gaming population for being sexist and representing violence against and degradation of women.

Those who are familiar with the series will know that the trailer was meant to show Agent 47 showing off his ice-cold killing skills against a kinky group of enemies, who in this case happened to be nuns in scanty clothing armed with Uzis, M14s and the odd RPG.

Such characters are nothing new to the Hitman world as previous games had players taking out obese drug lords who could not move out of their bed, hunter’s who hunted human beings and a butcher who liked to carve up his victims. It ought to be noted that the victims were more social animals (i.e. humans) than animals.

With that in mind Tore Blystad, the game director’s, comments will make more sense as he explained that the Hitman “series has always been extreme in many ways.”

That however, did not mean that Blystad would not be making the now mandatory apology in the gaming industry when he said, “We’re sorry that we offended people – that was truly not the intention of the trailer.”

He continued, “Of course we understand, this has been a very big topic for us and we’ve been reading as much as we could of the articles and responses.”

It turns out that the level of backlash for the trailer was more than the studio could have ever imagined. “We were surprised that it turned into such a huge topic. We just wanted to make something cool, it wasn’t the intention to stir up anything.”

It seemed that the game director was still in a bit of shock as to how the trailer, which a majority of gamers and almost all Hitman fans thought was rather cool, could have gotten the negative reception that it did.

“It really came as a big surprise to us how it all went down. It was never the intention to provoke people with it.”

Knowing how the Hitman games play out, it would not come as surprise if the same group of people find some other controversial topic to yell about sooner or later.