Killzone dev claims 2013 will be big year for the studio 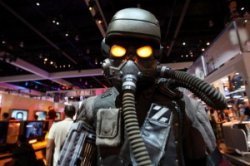 Victor Zuylen, Killzone Community Editor, took to the PlayStation Blog to wish everyone a Happy Holidays and tease some big announcements for the next year as well.

The Killzone series is one of Sony’s biggest exclusives, especially in the first-person shooter genre. The first game in the series was released on the PlayStation 2 and received mixed reviews. However, the sequel to the game made headlines when it was announced for the PlayStation 3.

Sony opted to release a pre-rendered trailer when the game was revealed and was criticised for it, however, the trailer which was made using in-game footage, which was released a year later at E3, blew everyone away.

Killzone 2 not really established the IP and Gamespot gave it the award for the best multiplayer experience in the year it was released. There were those that were not too impressed with the game’s heavy controls.

Killzone 3 was released soon after and it came with more streamlined controls, which made it more accessible to a wider range of gamers.

There has been plenty of speculation as to whether or not Killzone 4 will be one of the PlayStation 4’s launch titles. Guerrilla Games has confirmed that it is working on a new project but did not give any specific details.

The studio has expanded since its last release, as it has added a new studio to its ranks.

According to Victor, “The biggest highlight of the year was bring able to welcome SCE Cambridge Studio into our fold. We’ve officially become a multi-studio company!”

As it turns out the team at the new studio is not new to the portable platform, “The team is intimately familiar with handheld game development, having previously worked on titles such as LittleBigPlanet for PSP, and they’ve done a phenomenal job adapting the Killzone 3 engine for the PS Vita platform.”

That’s when the teasing began and Victor managed to get a few people, ourselves included, hyped up for the next year. He said, “2013 is gearing up to be another big year for Guerrilla – quite possibly the biggest since we released the original Killzone way back in 2004.”

He did not give anything else away but did promise more information later on. He explained, “We’ll have more details for you at a future date.”

Whether or not Guerrilla Games announce another Killzone title or a completely new IP remains to be seen but here’s to Victor for getting everyone’s attention.

But what are you expecting from Guerrilla Games in 2013? Let us know in the comments section below.