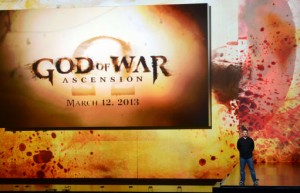 The original god of War before Kratos showed him to his brutal end, Ares will be one of the gods that players can choose to align themselves with in the God of War Ascension’s multiplayer component. Doing so will give the player a number of unique advantages over their foes.

Santa Monica studios may no longer be behind the development of the latest entry in the God of War series but that has not dampened the excitement leading up to the release of what has to be the best-looking game in the series, if not the PlayStation 3 console, yet.

While the God of War trilogy has come to its logical end, SPOILERS! unless Kratos decides to re-emerge from the underworld, which he pretty much destroyed last time around, or at least sent it down that path with the brutal slaying of Hades SPOILER END one can expect future titles in the series to go back into the past.

That is exactly what Sony have done as the latest installment in one of the PlayStation brands most iconic, and best-selling series, is a prequel. Kratos is a mere-mortal and his vendetta is not as consuming as it was in the three core games. However, he is no less of a bad-ass if we believe what we’re told.

The story though, the game’s main driving force, will have to take a backseat as it is the multiplayer that is the centre of attention here. Players form teams of two and work against other teams to complete objectives for the god that they have aligned themselves with.

Each god gives the player unique abilities, which are aimed not only to suit their playing style but to give them an edge over the competition.

Todd Papy, the Game Director of God of War: Ascension, explained how aligning oneself with the original god of war would grant them two unique abilities.

“Find two or more enemies in a concentrated area. Use Ares’ inferno magic to leap sky-high and slam down with [R2] to knock them into the air. The moment you land, wield your weapon immediately with a series of brutal combo attacks on your enemies while they are stunned to earn a quick victory.”

“Ares’ War Hammer is great against groups of enemies as well. The weapon’s special attack executes a long range wave of fire that will knock back every enemy in its path, and also has an area of effect slam to knock everyone nearby up into the air. A great tactic is combining these two attacks for some wicked air juggle combos.”

So does Ares offer you enough to give him your allegiance or are you still searching for the god that’s right for you? Let us know in the comments section below.