Mario and Legend of Zelda creator wants to make a FPS 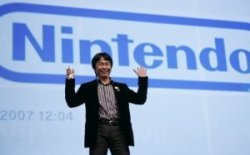 Nintendo icon, Shigeru Miyamoto, admits that he would love to make a first-person shooter one day when he has the time.

Nintendo is known for many things, such as the Mario series, the Legend of Zelda franchise among other titles and the heart of each of their best selling and most popular series is Shigeru Miyamoto, whose portfolio of the range games he has worked on is inspirational.

Creating iconic series such as the ones mentioned earlier as well as the likes of Donkey Kong, Miyamoto is widely regarded as one of the gaming industry’s shining stars and it seems that the developer has one eye on delving into the world of first-person shooters. However, he did concede that his current busy schedule is not allowing him enough time to do so.

“I actually do kind of want to make a first-person shooter, but I don’t have time,” Miyamoto admitted.

One has to wonder why the developer would turn his attention to a genre that has been done to death in recent years with the likes of Battlefield, Call of Duty, Killzone, Resistance, Halo, Crysis and Bulletstorm have together covered every possible angle of.

However, Miyamoto seems to want to break the generic trend that the genre has fallen into and is more focused on the basic formula of a first-person shooter. To be more specific, his aim seems not to be focused on guns but rather tweaking with the definition of weapons and their projectiles.

He said, “Rather than necessarily the question of ‘What kind of weapon do I have?’ in a first person shooter or ‘What kind of effect does that have on an enemy?’ I think that the structure of a first-person shooter is something that’s very interesting.”

If one was to look at it from that angle then a whole range of possibilities begins to open up and with a mind like Miyamoto’s one cannot begin to wonder what kinds of ideas the developer has locked up in a tower deep inside his mind.

Miyamoto also continued with how players could interact and explore the world in a first-person shooter differently from how his earlier projects have. He said, “Having that 3D space that in theory you are in and being able to look around and explore that-particularly being able to do that in conjunction with another person-is very interesting.”

If anyone deserves a chance to bring something fresh to the first-person shooter genre then it is the creator of Mario and Zelda (not to be confused with the game’s protagonist, Link). It seems that the developer has the theory down and has a rough idea of where he wants to take the project, the only thing missing is him having enough time to pursue the concept.