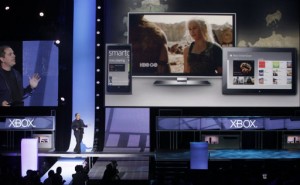 E3 for Microsoft this year was about two or maybe three things. The first was Halo 4, which started the company’s media presentation off with a bang. The second was Gears of War: Judgment and lastly and perhaps the most memorable was Xbox SmartGlass, not because it was that amazing but rather because it took up so much of the press conference.

The feature basically allows to transfer media seamlessly from one Windows powered device to another. An example being that if a person is watching an episode of HBO’s A Game of Thrones on his tablet, then upon returning home he may simply, with the press of a button, continue the show on his television set at home via the Xbox 360.

This works the other way around as well and with smartphones as well, as longs as they are powered by Windows. The feature also allows users to expand their entertainment experience as was demonstrated during the E3 media presentation.

Taking the example of A Game of Thrones again, while the episode is playing on one’s television the tablet or smartphone can simultaneously display where in the ‘Game of Thrones world’ the scene is taking place.

So if Jon Snow is on the screen then the tablet will let viewers know whether he is Beyond the Wall or at Castle Black. For the few of the readers who have not seen the television series and have no idea what Castle Black or Beyond the Wall is, should do themselves a favour and watch at least one episode of the show or read the books if they’re really up for it.

Getting back to the point, Microsoft has made the SmartGlass Software Development Kit available for download on their website. However, before any eager, or rather nosy, folk make their way over to the website to download the kit, it should be noted that the SDK is only available to select parties such as Microsoft’s partnered developers.

SmartGlass may not have much to do with gaming at the moment, yet the potential is there as gamers could one day use their smartphones and tablets alongside their consoles in order to expand their gaming experience. Although an extra pair of arms would be nice to manage all the devices at once, although one can be pretty sure that Microsoft won’t let it get that complicated.

Earlier on in the month Nintendo President, Satoru Iwata, slated Microsoft on its SmartGlass technology. The Nintendo boss, claims that Microsoft have only touched the tip of the iceberg of what Nintendo is already doing with the Wii U and its tablet controller.