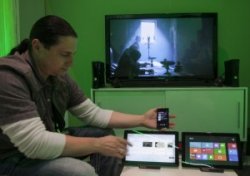 Satoru Iwata claims that Microsoft has only touched the tip of the iceberg of what the Nintendo Wii U is already capable of doing and that the Wii U would do everything that Microsoft’s tech can do but better.

Nintendo seem to be in a bullish mood regarding their next generation console, the Wii U, as the company has launched a direct attack on their competitor, Microsoft.

The Nintendo President, Iwata, took the opportunity during a recent investor meeting to point out how Microsoft were actually a step behind what Nintendo were planning to do with the Wii U and how SmartGlass still had some way to go before it could come close to posing any considerable threat.

Iwata almost taunted Microsoft when he said, “The question is, is what they (Microsoft) are offering truly capable of doing everything that we’re offering? From what we have seen so far, it looks to us as if what they are able to offer really is only a small facet of what the Wii U is capable of.”

The Nintendo president went on to state a number of different ways that the Wii U would allow for a richer, more immersive gaming experience while not taking away from the ‘home entertainment solution’ that the next-gen consoles seem to be aiming towards.

Iwata claimed that even if Microsoft was to add new features such as the ability to connect two consoles, it would still have plenty of ground to cover in order to catch up to the Wii U.

He said, “I believe that even if Microsoft is able to bring SmartGlass to their console or if, according to the Sony story, the company is able to connect two different consoles, the advantage that we see in the Wii U will not be taken away.”

Bold claims indeed, however, Nintendo has a history of surprising everyone by pulling these surprises out of their metaphorical hats and stealing the show whenever they have been labelled as the underdogs. They did that with the motion control based, casual gamer oriented Nintendo Wii and plan on doing the same with the Wii U.

However, the jury is still out regarding Nintendo’s upcoming console, the media presentation at E3 not impressing too many in the gaming community.

This is surely only the first round of what looks set to be long war of words as each platform developer will be looking to gain the upper hand on their rivals in the build-up to the next-gen of home consoles.

Sony earlier admitted that the Nintendo Wii U would pose a threat to the PlayStation business, however also added that it would be a case of Sony’s premier exclusive content against Nintendo’s new technology.