No online multiplayer in Nintendo Land justified by Nintendo 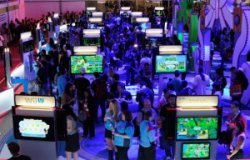 The company justifies no online support for Nintendo Land, contending that it encourages real-world interaction between players in the same room.

Nearly everything that Nintendo has done over the last few months have led to a debate over the correctness of that particular decision.

One of the recent reasons for the Japan-based company to find itself in the hot-seat is its decision to offer no online support for Nintendo Land, the multiplayer video game that shares its release date with the launch date of Wii U in different regions.

With no online support, the launch title requires players intending to play the game together to be seated in the same room to enjoy the multiplayer experience.

Nintendo producer Katsuya Eguchi has a solid explanation for putting online support in Nintendo Land, something that has become somewhat of an essential feature in today’s video games.

During an interview to the Japanese gaming Magazine Famitsu, Eguchi explained that Nintendo is aiming to encourage players to interact with each other in real world while playing a video game together.

He said that the multiplayer attractions of Nintendo Land have their appeal boosted even further when players communicate with each other during the mini-games.

“Nintendo Land’s multiplayer attractions work because of the communication shared between the people playing them,” Eguchi said. “So they were set up from the start to be something people in the same room could enjoy.”

No online multiplayer for Nintendo Land may come off as odd for gamers who have gotten used to online play, especially the fans of first-person shooters such as the Call of Duty franchise.

However, Nintendo’s decision to restrict Nintendo Land to offline multiplayer mode appears to be perfectly in line with the company’s goal of making gaming a family activity instead of an individual one.

The Japan-based company has focused on making games that offer a fun and entertaining experience for the entire experience. Games such as Mario and Zelda are all designed in such a way that they remain accessible to players of all ages, while presenting just the right amount of difficulty to make them feel challenged.

Nintendo is clearly aiming to continue its goal of being a source of family entertainment with its first-ever HD console Wii U, which launched in North America on November 30, Europe and Australia on November 30, before eventually hitting the shelves in Japan on December 8.

Nintendo Land is among the top-selling titles for the recently launched dual-screen gaming console in a number of regions.

The game is serving the same purpose as what Wii Sports served upon the launch of Wii, i.e. demonstrating the functionality of the new console and its unique tablet-inspired controller GamePad.