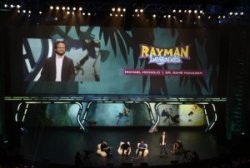 The fans of the Rayman franchise may have been disappointed to find out a few months back that the game would not be a launch title for Nintendo’s upcoming console Wii U, but Ubisoft has come up with somewhat of a consolation for them.

According to what the company has told Polygon, a demo version of the platform game will become available on the same day that the next-generation console hits the market in North America, which is November 18.

Gamers would be able to get their hands on the promised demo through the Nintendo eShop.

Ubisoft also revealed the levels and characters that the players will be able to access in the demo version of the game.

According to a representative of the publisher, the demo will feature three challenges, all from different sub-worlds of the upcoming game.

These levels will include the “Teensies in Trouble” stage that was shown during the Electronic Entertainment Expo (E3) earlier this year in Los Angeles.

Additionally, players will also get access to the “Castle Rock” musical level for the first time, thus getting an even better idea of what is heading their way in the not-so-distant future.

Aside from the three challenges, the demo version of Rayman Legends will allow players to play solo or team up with up to four additional players, with the fifth player manipulating Murphy via GamePad’s touch-screen.

The levels to be made playable in the demo version of the platformer have been chosen to give gamers a clearer idea of the solo and co-operative play, while also highlighting the impact of the GamePad on the game and how it is played.

The upcoming Rayman Legends demo will additionally give players an access to various items and features, which include the in-game closet containing costumes for players, a knight uniform of blue blob Globox and an access to the Collection of Heroes.

Revealed earlier this year, Rayman Legends was initially confused for a sequel to Rayman Origins, though a leaked trailer showed it to be much more than that because in terms of both presentation and gameplay.

While the game was originally planned to be released on November 30, 2012, the same day when Wii U hits the European and Australian market, Ubisoft announced last month that the game’s release has been postponed to the first quarter of 2013, March 5 to be exact.

Since the very first day, Ubisoft has been giving an impression that the upcoming title in being developed only for Nintendo’s first high-definition (HD) console. However, the company’s senior game manager Michael Micholic hinted that other platforms are being considered as well.

The game was eventually confirmed as a Wii U exclusive through a trailer released at Gamescom 2012.