Portal 2 gets DLC designed for the PlayStation Move 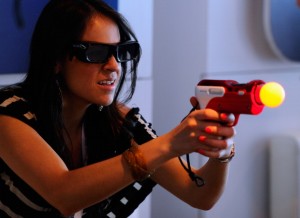 In Motion is Valve’s latest offering in terms of Downloadable Content for their award-winning, Portal 2, and has been designed with motion control, or more specifically, the Move controller, in mind.

The original Portal game was nothing more than a project by a group of students who used Valve’s Source engine to build the game. Valve saw enough potential there to release the game and before anyone could check to see if their fly was open, the game became a massive hit and garnered a cult following of its own.

In fact, the game has become so influential that there is talk about it actually fitting into the Half-Life universe. While it remains speculation there is a possibility seeing how both games seem to have the ‘portal’ element in common. Whether or not it turns out to be true remains to be seen, but just to have a majority of gamers talking about the possibility should indicate just what an impact the game has had.

Then came the sequel to the game, which only built on its predecessor’s success. Winning numerous Game of the Year and Best in Category awards, Portal 2 was another instant classic. The game also threw in co-op gameplay which is still loved by many a gamer today.

In order to keep players invested in the Portal-verse, Valve is set to release a  DLC pack for the PlayStation 3. The DLC was originally set to be released on PC’s and use a motion controller for the platform as well but the studio decided that the existing infrastructure of the PlayStation 3 and the PlayStation Move would be more suitable.

There are over 20 puzzles available in the DLC and is set to release on the 6th of November. The DLC is priced at $9.99 for the United States region PlayStation Network and Store but PlayStation Plus members also get a 30% discount, which isn’t a bad deal.

Players will need to download an update along with the DLC, which will make the game compatible with the Move controller.

Sixense, was handed over the responsibilities for developing the DLC and they described the ‘In Motion’ expansion as one that would bring new “gameplay mechanics including scaling and rotation of objects as well as portal surfing.”

It seems there is still plenty of life left in the puzzle platformer and one has to wonder which direction the series will be heading in the third instalment.

While this news may be great for many there will be a number of gamers wondering when Valve is going to expect anything relating to Half-Life 3 or even episode three as the world has been waiting since 2007 for Gordon Freeman’s story to continue.