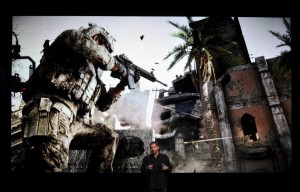 Seven members of the US Navy SEALs Team Six are under investigation for revealing secrets while serving as consultants on Electronic Arts (EA) Games’ Medal of Honor: Warfighter.

The publisher boasts bringing real-life commanders, both active as well as retired, on-board during the development of their war-oriented games to bring as much realism into the experience as possible.

However, this time bringing the Medal of Honor experience close to reality by bringing in seven active SEALs Team Six members have gotten the latter in trouble.

According to CBS News, these SEALs members violated the rules by using classified material given to them by the Navy while working as consultants for the latest title in the Medal of Honour franchise.

One of these members was reportedly part of the team that carried out the raid to rid the world of the threat of Al-Qaeda leader and the master-mind behind the 9/11 attacks on the Twin Towers Osama Bin Laden once and for all in Abbottabad, Pakistan.

While already receiving punishment, the worst may be yet to come for them.

SEALs is characterised by operating in the shadows and staying out of spotlight, though killing Bin Laden last year has prevented them from keeping a low profile for a while.

For a publisher like EA that is always aiming for realism in its first-person shooters, the US Navy SEALs was naturally an obvious choice to approach while working on the sequel to the Medal of Honor franchise that was released in 2010.

Convincing seven members of the SEALs to serve as consultants for the game, EA knew that it had hit a jackpot because the elite force has been one of the hottest things over the past one year, courtesy of a successful raid to kill Bin Laden.

While the publisher did nothing out of the ordinary, the seven SEALs Team Six members reportedly broke the code of secrecy and therefore face a daunting task of proving their innocence in front of the investigating body.

It is not yet clear just what secrets were revealed while the accused SEALS members served as consultants on the first-person shooter.

Announced in February earlier this year and hitting the markets in the US in the final week of October Medal of Honor: Warfighter did not receive the best reviews, with EA Labels boss Frank Gibeau admitting the reception to the game was well below the publisher’s expectations.

However, he conceded that the company planned on pushing the game through strong marketing efforts during the holiday season.