The best-selling game in Europe for 2012 is… 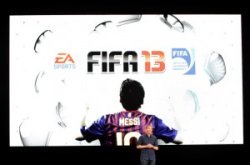 FIFA reigns supreme in Europe as no less than nine PlayStation 3 titles make it into the top 20 best-selling games for the period January to September 2012.

Europe is known as being more of a balanced region in terms of the type of games that are played and usually has a tendency to adopt PlayStation consoles as their primary means of gaming. That trend may be changing slowly though one can except Sony to maintain their stranglehold for one more generation at least.

The chart shows that Europe is just as obsessed with Football as the United States is with American Football as the top two best-selling games in Europe from January to September were the PlayStation 3 and Xbox 360 versions of FIFA 2013.

The game has sold over 7.4-million units in its first month following release and it seems that in Europe at least, the PlayStation 3 version has the edge over its Xbox 360 counterpart.

In third place, is a bit of a surprise as FIFA 2012 Managed to carry enough momentum into the current year to beat out almost every other game apart from its younger brother.

No chart is complete without the mandatory Call of Duty title and Modern Warfare 3 on the PlayStation 3 managed to finish fourth after breaking records early on in 2011.

The first of three Nintendo 3DS titles in the European best-selling charts is none other than Super Mario 3D Land. One of the few reasons players pick up the console, Super Mario 3D Land paved the way for higher 3DS sales during a time when the portable console was struggling.

Just Dance 3 on the Nintendo Wii may not be a game per se, but it does make terrific use of the medium and is the type of product that has no age restriction, which is probably why it finished in sixth place.

Another Mario title now and Mario Kart 7 had 3DS owners in a frenzy as it brought back some of the classic, addictive Mario carnage that everyone has come to love over the years and put it into the palm of the player’s hand to play anywhere at any time.

One of the biggest surprises has to be Gran Turismo 5, which comes in at number eight. The game was released nearly two years ago in 2010 and the fact that it is still in the charts is a miracle or just a pretty solid racing game.

Mario Kart for the Wii comes in at number nine and Sony’s premier action adventure epic, Uncharted 3: Drake’s Deception manages to round off the top ten.

Max Payne finished in 20th place while Battlefield 3 just missed out on the top spot as it came in at number eleven.