Home » News » Uncategorized » The Last of Us gets a prequel, comic book style

The Last of Us gets a prequel, comic book style 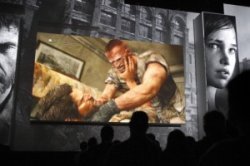 Neil Druckmann, the creative director of the game, is working with artist, Faith Erin Hicks, on The Last of Us: American Dreams, which will serve as a prequel to the game and add a back-story to Ellie’s character.

Sony seems determined to ensure that gamers do not forget about The Last of Us amidst the holiday season chaos and the string of new games releasing between now and the day Naughty Dog release their ace-looking game.

The Last of Us literally blew everyone away at E3 with its gameplay demo and then again with its ‘Old and Forsaken’ trailer, which really hit home with anyone who watched it. The game just seems to be get better and better with each bit of information that makes its way to the general public.

Also, the fact that the game is being developed by the same studio that brought the Uncharted trilogy to the world, one can rest assured that in terms of quality, the game will be nothing but top-class.

However, The Last of Us centre’s around two characters, Ellie, who was born after the apocalypse and has no idea what the world was like before then and Joel, who has a dark past but sees saving Ellie as his chance of retribution.

Neil Druckmann, the creative director of the game, explained how he was reluctant to go ahead with the comic book prequel to Ellie’s character as he wanted to focus all his efforts on ensuring the game was better than everyone’s expectations. However, he was even more reluctant to have someone else in-charge of the comic book.

He said, “I didn’t want to just hand off these characters and find a writer, find an artist and do this thing and just say it’s not canon. If we were going to do this, we wanted to do it right.” Almost brings a tear to the eye doesn’t it?

Druckmann went on to elaborate on how the comic book was not just for those planning on reading the game but also for those looking for a deep, immersive story with rich characters.

He also explained how “If you do read this comic book and you play the game, you should get greater depth, a greater understanding of these characters and the world and what’s going on with them.”

The creative director continued, “The other cool thing is that working on the comic book has helped me develop more of Ellie’s backstory.”

Druckmann also explained how the comic was made alongside the game, which meant that the two saw inspiration drawn from each other.

“Because we haven’t finished the game yet, we’ve been able to weave some of those threads into the story of the game.”

The Last of Us: American Dream is set to release in Spring 2013.