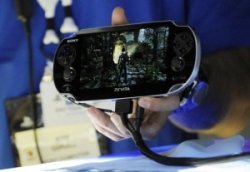 The fans picked Uncharted: Golden Abyss as their Vita Game of the Year but it seems the editors over on the blog went for something different.

The PlayStation Vita celebrated its first birthday recently and the console has been a mixed bag for many. There are a section of gamers who are extremely pleased with the console while others have been let down at the same time.

The main issue with the Vita seems to the lack of standout titles or titles which define the console rather than the popular franchises making their way onto the Vita with a few of the console’s features thrown in.

On the sales front, Sony has admitted that the figures could have been better but instead of reducing the price the plan seems to be to improve the library of games on offer, a strategy that has worked but not on a consistent enough basis.

All that aside, the Vita does have a number of games that have tickled many a gamer and an editor’s fancy and it seems that Gravity Rush seems to have found a place in the heart of PlayStation Blogcast co-host, Nick Suttner, who said, “A lush world and loveable character wrapped around a set of mechanics that feels downright awesome in the palm of your hands.”

As for Justin Massongill from the US PlayStation Blog, the Japanese RPG, Persona 4 Golden was his pick of the Vita titles and he praised Atlus, the game’s developer for their efforts when he said, “Atlus has rebuilt one of PS2’s most highly regarded games for PS Vita, they’ve proven that a well0written, visually striking, character-driven RPG van still find an appreciative audience.”

The final pick of the editor’s was the choice of Sid Shuman, also from the US PlayStation Blog, who picked the Cross-Play title, PlayStation All-Stars Battle Royale as his Vita title of the year. He said, “SuperBot’s slavish attention to detail shines on the OLED screen and the characters feel intoxicatingly powerful, making this a perfect choice for mobile encounters.”

On the fans side the Gold, Silver and Bronze Trophies went to Persona 4 Golden, Gravity Rush and Assassin’s Creed 3: Liberation respectively. There was little love for Black Ops: Declassified which has been slated by gamers and critics alike. The game was developed by the same studio that worked on the Resistance title for the Vita, Burning Skies, and their earlier project, although forgettable, was a much better one than their latest.

But what was your Vita Game of the Year? Let us know in the comments section below.