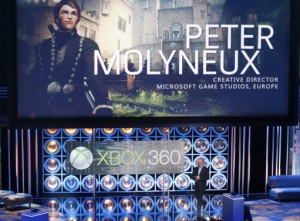 People are always looking for ways to kill boredom and while they were heavily reliant on the film industry for their daily dose of entertainment, the trend has changed in recent times.

Video games are beginning to become more popular than ever before. While it was traditionally confined to a particular niche, it is now catering to the entertainment needs of a major and diversified part of the population.

Former Microsoft executive and industry legend Peter Molyneux voiced a similar opinion at the United 2012 conference in Amsterdam this week.

According to him, people are no longer able to derive the same pleasure through films or TV programmes as before. Even if the content they come across is entertaining, it lacks the ability to surprise them and thus ends up dragging them in a feeling of déjà vu.

He however asserted that video game industry is still able to offer people something that they have never seen before.

During the conference, Molyneux stated with conviction that the whole world is moving towards gaming, a statement that he supported with the claim that the gaming industry has a greater entertainment value as compared to other forms of entertainment.

“The amazing thing about where we are today is that the whole world is becoming gamers,” added Molyneux.

There is indeed no doubt that gaming is gaining popularity in the current era. With the advent of smartphones and tablets, developers find themselves with a greater opportunity to reach out to people, even those who were under the impression that they are not skilful enough to play or enjoy a game. The term ‘casual gamers’ emerged as more and more people began to play games that were developed keeping the diverse market in mind. The notion that games are only meant for committed hardcore gamers was finally removed and suddenly it become a norm to be playing a video game.

Molyneux, who resigned from his post at Microsoft earlier this year to establish an independent company 22 Cans, urged the developers to continue the process of innovation and keep surprising gamers with new and innovative content. He admitted that it is often quite tempting to revert back to the existent designs, but that is something that needs to be avoided in order to meet the expectations of gamers.

“It’s so tempting to fall back on our old cornerstones of design,” said Molyneux. “But often these cornerstones can become millstones round our neck.”

22 Cans is all set to release its first intellectual property for the iOS next month. The game was originally named Curiosity, but an objection by NASA has forced Molyneux and his team to think of a new name.