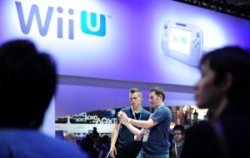 … or as they put it, over80 hours of non-stop use, which isn’t bad, though many would want to know what the primary controller, the one with the screen, offers in terms of battery life.

As is the case with any new piece of hardware, a number of third-party manufacturers attempt to flood the market with accessories and add-ons as they look to ride the wave of success alongside the primary company.

It happened with the PlayStation Portable, the iPhone, the Xbox 360 and even with Wii, as a number of non-official accessories, in the shape of cases, controllers, cables and chargers, made their way to the market and pretty much flooded it.

However, the latest controller will appeal to a large number of gamers who still cherish the memories of having a SNES Controller in their hands as the Retro Wii U Pro is designed to look like the classic controller of old, but with all the extras, the analogue sticks and shoulder buttons, added to it.

At this point in time the controller is set to retail at $48, which is cheaper than its official cousin, however, lower prices do tend to mean lower quality as well. Also, the controller is only available from EB Games…in Australia.

On the other hands, the official Wii U Pro controller, which was designed to allow core gamers to easily transition onto the Nintendo console, which the company emphasized on while pitching the new controller to the masses.

“Designed for accessibility and extended gameplay comfort, the Wii U Pro Controller features the dual analog sticks and ergonomic button layout that you’ve come to expect as well as a rechargeable battery that can last up to 80 hours on a single charge.”

Quite impressive if the controller lives up to the billing, although one has to wonder how long the controller will take to fully charge in the first place. The hype building continued, “The Wii U Pro Controller can be used for playing a variety of games – from packaged games at retail to downloadable games from the Nintendo eShop.”

However, Nintendo also pointed out that the controller would not be compatible with every game and that consumers should check the packaging of each purchase in order to ensure there was no disappointment later on.

“Look on the back of the Wii U game packaging to see which games se the Wii U Pro Controller. Not compatible with the Wii system or games.”

Both controllers are set to release alongside the console later on in the year, however, the GamePad itself will not be sold separately at launch in North America, so it does make the Pro Controller the only alternative for some.