Tomb Raider, Hitman Absolution heading to the Wii U? – Rumour 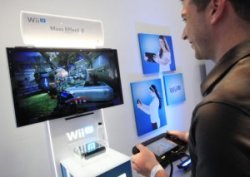 Straight Right, the studio currently porting Mass Effect 3 on to the Nintendo Wii U, may very well be working to bring a Square Enix title to the console. Could it be Hitman, Tomb Raider or even Deus Ex?

There are many sources for news in the video game industry; there is of course the official source, with publishers, developers and manufacturers making announcements. However, there are many more ways to get some inside info such as retailers prematurely listing or de-listing titles.

At the same time there are unintentional leaks as well but perhaps one of the most common indicators is when a bit of information appears on someone’s resume. God of War: Ascension rumours picked up speed when it appeared on an employee’s CV under the experience section.

This time around, it turns out that the bit of information is rather vague, as publishers have issued non-disclosure policies on their employees to keep new unannounced projects under wraps until they are officially announced.

So one gets these, “working for Straight Right on a short term contract, porting a triple-A Square Enix game to the yet-to-be-released Wii U platform,” which was mentioned in the experience section of a certain Chris Slater, who happens to be a Technical Project Manager, working at Straight Right at the moment.

The news is intriguing because Square Enix is working on a number of games and has also released a number of hits over the past year, out of which one game is heading over to the Wii U.

Chances are that the game could be an older title such as Deus Ex: Human Revolution, as it seems the most likely to make use of the dual-screen concept, which would fit in perfectly with the gameplay.

On the other hand, Sleeping Dogs has been a massive success and there is enough scope for the game to move a few Wii U units during release as well.

However, one cannot rule out the games that are set to be released later this year, with Hitman: Absolution another possibility. The game appeals to the core audience and seeing how that is the segment that Nintendo wish to target with the Wii U, one can never rule Agent 47 out.

Lastly, is Tomb Raider, which if it turns out to be the title in question would be a perfect fit, seeing how it sees the rebirth of Lara Croft (well, actually more of an origin story but still) and how that is similar to what Nintendo are looking to achieve with the Wii U.

No official comment has been made by the concerned parties on the matter and it seems everyone will just have to wait and see which of the games will be making its way on to the Wii U.