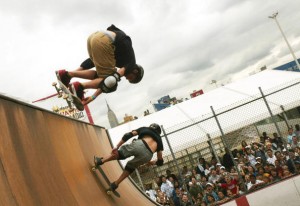 The fans of Tony Hawk’s Pro Skater HD will have to wait a while longer to get their hands on the game’s first downloadable content (DLC) as Activision revealed that it has been delayed to the first week of December, 2012.

Released during Microsoft’s Summer of Arcade promotion earlier this year, the game was originally going to be getting its first DLC shortly after.

The content, which was going to introduce some additional maps inspired from the popular third title in the Tony Hawk’s Pro Skater franchise as well as the “revert” feature to what can be fairly regarded as a high-definition (HD) remake of the series, got delay to November.

The “revert” feature had been a part of Tony Hawk’s Pro Skater 3, but was notably missing from the latest offering.

However, developer Robomodo was well aware of the demand of the feature and therefore made it a part of the very first DLC that they planned on releasing for the game.

With the DLC containing such appealing maps and feature, the excitement and anxiety of the fans to get their hands on the content hardly comes as a surprise.

As November was announced as the release date of the much-awaited DLC, the fans felt like their wait was finally going to be coming to an end.

However, the fans of the franchise had their party ruined by Activision, who revealed on its Facebook page that they had learned that the DLC will not be going live until the first week of December.

“Take a deep breath … let’s get into zen mode. OK, ready? We received word that the DLC has been delayed until the first week of December. It will definitely be coming to all 3 platforms then,” read the post.

The skateboarding video game fans will definitely not be too happy to come across this news as they have already been made to wait longer than expected because of the DLC getting delayed once already.

Now that Activision has confirmed that the Tony Hawk’s Pro Skater HD fans will have to wait even longer to enjoy the new maps and see the return of the “revert” feature, it may very well frustrate some gamers to the extent of making them turn their attention to other games instead of sitting in wait for a DLC that was originally headed their way two-to-three months ago.

Let us hope that the game does not end up losing its fans because of the delays in its DLC, which have become increasingly popular in recent times to keep the experience on offer fresh.