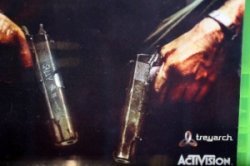 The developer admits that a number of as yet unreleased modes are being played by the devs and could be released in the near future, but no specific details were given.

If there is one thing that Activision is good at its post-launch releases of content, or as it is more commonly known, DLCs. Of course there is also the publisher’s habit of raking in millions of dollars worth of revenue within an extremely short span of time following each of their Call of Duty game’s release.

Black Ops 2 may not be unanimously touted to go on and break Modern Warfare 3’s sales record, with increased competition in the first-person shooter space this time around with the likes of Far Cry 3 and more significantly, Halo 4, but it is difficult to deny the fact that it still has a decent shot of doing so.

The game managed to sell a million units at launch through retailer, GameStop alone and the total figure is estimated to be around the six-seven million copies of Black Ops 2 sold in the first 24-hours.

That figure has most definitely jumped since then and the game could very well be the biggest entertainment launch of 2012 if not a new world record. However, for that to be made clear Activision will need to release the sales figures of the game, which one can expect within a few days.

In the mean time however, there is plenty going on with the game itself as many fans are surprised t just how much Treyarch innovated in their latest outing as many were complaining that although the game’s in the series were still brilliant, they were slowly becoming stagnant.

Treyarch has expanded on their zombies mode and given the multiplayer mode a considerable make-over but it seems that there is more to come from the studio as the development team is testing a number of new game modes amongst themselves.

When asked about whether or not there would be any new game modes in multiplayer, David Vonderhaar, the game design director, revealed or rather teased,  ”Absolutely. Although we haven’t released any details, or even decided which ones, nor could I give you a count or time, we have several game modes we play in development.”

How many of those game modes make it to release remains to be seen however, there is no denying the fact that fans of the series will be looking forward to it. Another question then arises as to whether or not the new modes will be offered to users for free or whether they will be charged for it. Elite subscribers need not worry about the DLC but for those who have not signed up for the service the second question remains a pertinent one.