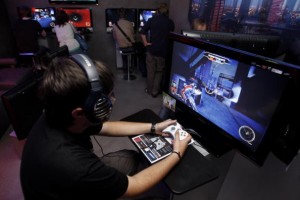 The Nintendo loyalists have been missing out on plenty of renowned franchises that had been coming out on the Sony and Microsoft consoles, as well as PC.

Things, however, are about to change a little as one of the biggest video game series in recent titles, Mass Effect, is all set to make its debut on the Nintendo console that is scheduled to arrive in the North American market on November 18.

It was announced during the company’s conference at E3 2012 that a Wii U port of the game was being developed by BioWare in collaboration with Australian company Straight Right.

The game named Mass Effect 3: Special Edition was to serve as a launch title for the upcoming console, thus adding the much-needed appeal to the next-generation console.

The External Producer for the upcoming title Wii U title Melanie Faulknor highlighted the features of the game on BioWare’s blog, going into the details of what had been done differently than the Xbox 360 and PC offering.

One of the most prominent deviations from the original Mass Effect 3 game released earlier this year was that the Wii U iteration was developed in a way to make full use of the unique tablet controller, GamePad.

Faulknor conceded that the players will be able to not only control the main protagonist Command Shepard from the GamePad, but will also be able to manipulate the squad-mates and their abilities from the tablet controller.

Another thing that a lot of gamers were interested in knowing was whether BioWare had weaved the downloadable content (DLC) into the Wii U offering.

The External Producer for Mass Effect 3 confirmed that a lot of content has been added to the Special Edition, including the From Ashes downloadable content (DLC), the Extended Cut DLC, the Rebellion, Resurgence and Earth Multiplayer DLCs, along with a bonus heavy weapon.

Another notable feature in Mass Effect 3: Special Edition mentioned by Faulknor was the updated Genesis interactive back story comic from Dark Horse, which made its first appearance in the PlayStation 2 version of Mass Effect 2.

The latest comic will allow players new to the franchise to catch up, while also being able to make the key choices that eventually shape the experience and determine the outcome of the story.

So far, the Wii U version of Mass Effect 3 comes off as a very promising title and understandably so as BioWare would want to leave a very good first impression on the Nintendo enthusiasts.

“I’m really excited that Nintendo fans will have the opportunity to experience the Mass Effect universe. When we were at Nintendo’s launch announcement event in New York, we spoke to a lot of gamers who hadn’t had the chance to play Mass Effect because we’ve never released on a Nintendo console before and seeing how exited they were to play the game is one of the best things about this project. I hope you enjoy playing it as much as I have enjoyed working on the project!” said Faulknor.

Do you expect the Mass Effect brand to have the same impact on Wii U as it did on Xbox 360 and PC? Use the comment section below to share your views with us.