Home » News » News , Uncategorized » The PlayStation Vita is better than the Wii U tablet – Sony exec 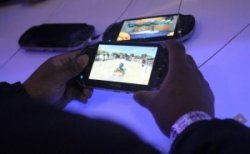 Scott Rhode claims that the fact that the Wii U does not have a processor limits its potential and use when compared with the Vita and how it could be used alongside consoles.

The Vice President of Sony Worldwide Studios, Scott Rhode, has blasted Nintendo on their lack of processor in their upcoming Wii U controller.

Rhode who previously commented on how Sony was still taking risks this late on in its PlayStation 3 console cycle, with titles such as The Last of Us and Beyond, claimed that Nintendo were not bringing anything particularly new to the market when it came to their controller.

Just to add a bit of context, the Wii U is the next generation console from Nintendo and the controller for the game happens to be a tablet as well, complete with touch screen. Nintendo showed off how the screen in the controller would allow for new gaming experiences as well as how gamers could potentially use the new interface.

The PlayStation Vita is Sony’s second generation portable gaming console and is pretty similar to the Nintendo Wii U controller as they both sport dual analogue sticks and a touch screen, however, for Rhode the crucial factor separating the two consoles is the fact that the Vita has a processor while the Wii U controller does not.

He said, “That Wii U tablet doesn’t have a processor in it, so it’s got to be fueled by that box sitting under your TV.” For those new to the world of video games, the box being referred to is the Nintendo Wii U.

Rhode went on to explain that the cross-platform play and interconnectivity between the Vita and the PlayStation 3 would surprise everyone and that gamers would get to know “more over the upcoming months about what you can do when you actually have a processor in the thing that’s in your hand as well.”

Comparing the two pieces of tech is somewhat unfair, as the Vita is a console in itself while the Wii U tablet is simply a controller, although that is a point that is the point that the Sony executive seemed to want to make.

It will be interesting to see what Sony come up with in terms of their next generation console as well as the controller with rumours that Microsoft may also introduce a tablet-like controller for their Xbox 720.

One could expect that the next PlayStation controller could have some motion control elements integrated into it and compatibility with the Vita does not seem too far flung and idea either.

It seems that the war of words has begun with platform developers taking verbal swings at each other as earlier Nintendo President, Satoru Iwata, blasted Microsoft’s SmartGlass.